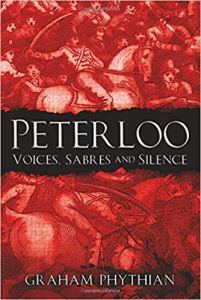 Do we need another book on Peterloo? Well, if you are referring to Graham Phythian’s new book ‘Peterloo Voices Sabres and Silence ‘ (The History Press), the answer is- yes we do. As the author says himself, there have been plenty of earlier books on the subject, and if his book was merely a summation of what has gone before, then there would be no need for it. But it isn’t. So there is.

The narrative is driven by the most skilful use of a wide range of primary sources which much have taken an age to compile, comprehend and combine. I know because I have tried this myself in my own work Dark Days of Georgian Britain, and at times I could feel the author’s pain. It is these primary sources that drive the book, with the author fully cognizant of the theories and positions of secondary sources but-crucially- sticking to an interpretation of the primary sources. That’s why the book is necessary.

The book, according to the author, was written for those with a sketchy idea of what the day entailed. At this point I thought I had wasted my money (full disclosure- I paid for the book myself) as I have more than a sketchy knowledge of the events. Once again, there was no problem. Firstly, I realised that ‘sketchy’ is a comparative term and that I did have a lot to learn. Secondly, I could see that another reader, a person who was interested but only partly informed, would also get a lot from this book.

The structure helps beginner and expert alike. It starts with broad introductionary chapters, moves to a narration of events and finishes with establishing the wider meaning of Peterloo. The title is brilliant; it was indeed about voices, sabres and silence. In a society that did little more than protect property, wage war and run a moderately efficient Post Office, it was remarkable how much effort was used to suppress voices, deploy sabres and silence popular protest and legal culpability. Sometimes when reading about Peterloo, I think about Orgreave , or Hillsborough, or Bloody Sunday.

Phythian’s introductory chapter on the grim flipside of Regency Britain is a masterly overview of the situation with a brilliant title “The Janus Country”. That’s exactly what it was, and I wish I had thought of the title myself. The chapter on law and order is a localised chapter on Manchester rather than a wide ranging review of the creaking Georgian justice system.  It has to be that because Peterloo was just as much a local failure of local government as anything else. Manchester is the best example of an underfunded and overstretched legal system and civil society struggling to cope with the changes of industrialisation and class struggle. The massacre, arguably, was going to happen in Manchester first, because of what early capitalism had created there.

The sections on protest and dissent before Peterloo has something for the beginner and the expert. While claiming to be neither, I was struck by the importance of spies and agents provocateurs in the whole process, and realised that I had not given this enough prominence in my own writing. If you haven’t spent two years obsessing about the individuals involved ( I have!) then the pen portraits and carefully crafted reminders of the people involved will help you. These reformers were brave men- and women, and the women are covered without the condescension and tokenism that you sometimes get.

What happened on the day, Monday August 16, 1819? It takes 70 pages in this book, and that seems quite long, but it works very well. The primary evidence is presented step by step, and is particularly powerful when it deals with the injured and the way that they abused. It seems that the Manchester Yeomanry Cavalry rode a long way from St Peter’s Field to seek out victims, with  well thought out malice and a psychotic randomness. After reading this book, you will not believe that it was a terrible accident or temporary breakdown in law and order like some right wing commentators claimed- and still claim.

The aftermath of Peterloo was shocking. There was both a sustained cover up in the courts and a more unofficial propaganda campaign in the media. The book covers this well- I was pleased to have made a small contribution myself, and receive an acknowledgement from the author when he could have just not bothered. That was appreciated.

The last part of the book portrays Peterloo as the live issue that it most certainly is. When left wingers make films telling us not to forget it, or conservatives tell us not to make such a fuss, you know that it is worth a good book on the subject. This is certainly one of them.