Bread and Blood 1816
The price of bread mattered to everybody in 1816, and not just those who were obliged to eat it in large quantities to survive. It was a controlled commodity in many ways; outside of London, the price was fixed by the Assize of Bread, which regulated not only prices but the size of loaves that could be produced. Bread was made in 3 main sizes, the peck, the half pack and the quarter loaf, and in most jurisdictions no other sizes were permitted. Neither was it allowed to hawk bread on the streets. The last government regulation on bread sizes was not repealed until 2008, so the regulation of this staple runs very deeply in the psyche of all governments

The weekly Assize was lead by the magistrate or the mayor. Its job was to determine the cost of bread based on the market price of wheat and a due allowance for the profits of the miller and baker. It was assumed that about 90% of the price of a loaf was made up by the ingredients. The assize of bread was a facto control mechanism on the profits of these two groups and put a local limit on the size of their profits.

Bread prices rose rapidly in 1816. Here are some prices for the family sized quarter wheaten loaf. This loaf weighed about 4lb when baked, which makes it twice as heavy as the modern standard 800gram loaf of bread

By August 1816 the price of wheat had risen to 80 shillings a quarter, which was the price that imports were allowed. However, even with the increase in (mostly French) imports in the latter part of the year, prices did not fall. Foreign imports had stopped by December. The catastrophically poor weather had led to shortages in Europe. There were no available surpluses in the USA either.The domestic harvest had been mediocre; this exacerbated the situation. Most other crops for people and animals had been unspectacular because of the poor weather. In Oxford the quarter loaf was 8d to 10d in January; by December it had doubled 1s 2d (6p) and wheat reached 94 shillings a bushel. Conditions were much worse in France and the rest of the continent, as the British papers gleefully reported,

“In many parts of France bread is absolutely twice dearer than in England” Stamford Mercury (6.12.15)

It was clear that this was to be a food crisis all over Europe, perhaps the last one in Western Europe were people starved in significant numbers

Millers and Bakers already had a reputation for rapacity and dishonesty. The rise in prices in 1816 made this worse. There were accusations of both profiteering and adulteration in the newspapers. Conspiracy theorists commented that bakers had been receiving secret delivers of potatoes. Bakers were often one of the first victims of rioters. The Spa Fields protester of November 1816 smashed shops and paraded the streets with loaves on the end of a stick. The Littleport rioters attacked the bakers first and the butchers second.

The quality of the flour being used fell. The Royal Navy, as part of its post war disposals, offered defective flour for sale, clearly advertised as such. Recipes suggested that the poor could turn the worst grown wheat into nutritious ships biscuits instead; one correspondent suggested that adding carbonate of potassium to flour would render it “less “black, damp and tenacious”. Mr John Saines of Masham seemed to have written to every newspaper in the country with his plan to make bread out of unsound corn.

The newspaper editorials suggested that the populace should eat more “household” bread that contained more bran; and if the people would not eat it (especially those in cities who had a loathing of the coarse brown bread) then a least it could be used to feed those in the poor house. Other suggestions were cheap salmon and oysters. A “Morning Post” correspondent (August 9th) justified the use of more fish in the labourers’ diet with the Biblical but not nutritional reference “Man cannot live by bread alone”

Petitions were made to parliament to stop the distillation of grain. The rich sent letters to the papers asking people not to waste bread-as if this was the main reason for the problem. The concerned citizens of Cambridge organised subsidized household bread for the poor, with a stern warning for those who tried to buy better quality bread with their “ticket”

Potatoes were suggested as an alternative to bread. Giving money in lieu of bread to servants was another suggestion. The assumption was that they would eat potatoes instead. On December 28, a letter in the Northampton Mercury suggested that the poor were not cooking their potatoes well enough- it was only “done well in Ireland and Lancashire” –a reference to the poor Irish peasant and the Irish Diaspora in Liverpool and Manchester. Cobbett, as usual, took the contrary view with a letter from a Mr Goodman of Warwick (Political Register 20.1.16) who argued that potatoes were less value for money in terms of nutrition. He had boiled them down and concluded that they filled the belly but did not support the body.

Cobbett was criticised for saying that prices would continue to rise in 1817. He was right. 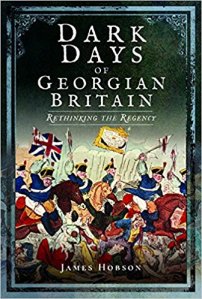 My book about the poor and powerless or regency Britain is available now. Google for best price, they can vary a lot. Please consider asking your Library to stock a copy