The Regency period was the time that population pressure and industrialisation turned a formerly rural areas into slums. The area called Angel Meadow in Manchester was one such place. In an 1802 advertisement-admittedly trying to sell property- described the area  as “An airy and pleasant place”. By 1844 Friedrich Engels called in “Hell upon Earth”. This was a remarkable transformation in 42 years, and it mirrors much of the social and environmental effects of industrialisation, which have their early roots in the Regency.
One of Britain’s first factories was in Angel Meadow . Richard Arkwright built Shudehill Mill between Miller Street and Angel Street in the 1780s, using the River Irk to transport raw cotton. By 1800, with population pressure growing, parcels of land were being sold off around the established church and roads. 1802 was particularly busy. Spinning Machinery from a factory in Back Lane, and Spinning Jennys from another factory were auctioned as well as existing houses with their sitting tenants.
However, it was mostly parcels of land that were being sold off. At the Commercial Inn, 2 houses and a plot of land were auctioned off, adjoining the Baptist Chapel in Angel Meadow. All of the advertisements mentioned the new turnpike road from Manchester to Blackley. One 1807 advertisement in the “ Manchester Mercury” advertised building plots owned by Thomas Carrill Worsley Esquire, saying that existing tenants were respectable and there was plenty of scope to build more because of the new transport links- in this case a new Turnpike road.

Manchester Mercury 15 December 1807
The contradiction was clear. Lots of housing were changing hands and the rent they brought it was clearly shown on the advertisements. These houses were very likely to be divided up. The air was clear and the tenants mostly respectable and the transport links were good and improving. So unregulated capitalism would ruin it with cheap uncontrolled housing attracting, by default, desperately poor people. 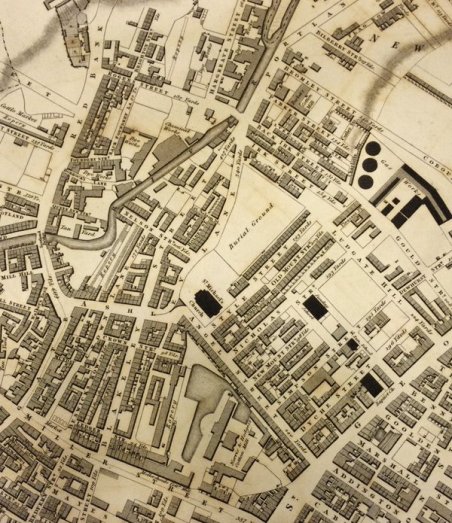 1831
All three fields are now full of houses. It is particularly dense in the areas that were already covered in housing in 1808.
( Thanks to the Friends of Angel Meadow for the maps)

Large scale sell offs continued until about 1815, when the financial slump brought a temporary stop to the exploitation of the Meadow. Two or three auctions a year were recorded by the Manchester Mercury; mostly in local public houses such as the still standing Weavers Arms (http://pubs-of-manchester.blogspot.co.uk/2010/04/63-angel-angel-st.html).

Small parcels of land were still sold off; existing tenanted houses were sold off but it was made very clear that most of these properties were “messuages” – that  they had added outhouses and land that could be developed. Mount Street was a particular focus for sales and New Mount Street is mentioned for the first time in 1815. Clearly the was becoming unrecognisable.
By 1820 the newspaper reports had also become unrecognisable. It became a crime report rather than a financial balance sheet. Bad publicity for Angel Meadow starts then and seems to go on for a century. Margaret Grimes was murdered by John Dunn in January 1820; apart from that, the residents of Angel Meadow seemed to specialise in stealing and handling stolen good and waylaying strangers who knew less of its growing reputation.

This “respectable person “ remained unnamed. Another victim, William Taylor seemed less innocent as he travelled through Angel Meadow in 1823. He met a stranger called Anne Lacey, who invited him to buy drinks for her at the Bears Head and then invited him home, pointing out that that they would be alone. When they got there, there was a gruff looking villain warming himself by the fire. William was perturbed but still gave Anne money to go out and buy gin. It took Anne a worrying long time of 45 minutes to produce the gin. When it and they were drunk, and the strange man at the grate had obligingly gone upstairs, Anne went out into the dark night to direct William to a lodging house. He was set upon by four men and robbed of £70. In the same year, Edward Griffiths, a “traveller out of Yorkshire”, came back to his lodging at the Bridgewater Inn and found it looked and bolted .A kind stranger called Thomas Goulding guided him through the dark streets where he was assaulted and robbed.
In 1823 Edward Venables was found with a stolen horse, taken a fair distance from Angel Meadow but it was thought safe to hide it there. In 1824 a gang of eight local men raided Sidebottoms Warehouse, broke a window and used giant hooks that were normal used to rescue people from the River Irk to fish out 93 pieces of calico which they hid (unsuccessfully) in a house in Sharp Street
This was only the reported crime. In 1823, the Manchester Courier bemoaned the inability of the local constables to do anything about crime. A local thug had recently impersonated a constable to get a thief liberated from a citizen’s arrest. The paper believed that the authorities had already given up on the area and left the “ Villains that infest the purlieus of vice in Millers Lane and Angel Meadow” to their own devices.
The even poorer and even more desperate were moving in. Many of these were Irish immigrants, although the main migration had not started by 1825. They too challenged the authorities and solved their disputes with violence

The worse was not over for Angel Meadow. By the 1830s epidemic cholera would arrive and add to the endemic diseases of poverty. The fate of Angel Meadows was important enough to be mentioned by the Hammond’s, whose book “The Town Labourer” described the effect of proto capitalism on the urban environment. Referring to the early 1830s, the Hammond’s commented that
“Manchester still had its Angel Meadow, but they were no longer meadows, and the only angel that came near them was the Angel of Death”

For more on Angel Meadow;

One thought on “An early industrial slum; Angel Meadow, Manchester in the Regency”

The geography of resistance, both past and present, in the British Isles (formerly Turbulent London)